27 Sep Have You Watched It Yet?

Posted at 16:28h in Conservation by Ngoteya Wild 0 Comments
3 Likes

HAVE YOU WATCHED IT YET?

Mkomazi Rhino Guardians film is a one of a kind type of film. The authenticity of this film is mesmerizing, as it is created with the devotion and passion for the conservation of the endangered species in Tanzania. It took six good months just to film and collect the necessary shots.

This documentary was filmed in Mkomazi National Park, 3,245 km2 of land that was established in 2008, which is among the youngest national parks in Tanzania. The park itself has beautiful views of Mount Kilimanjaro, Africa’s highest summit. The Mkomazi National Park also has views to the northwest and to the south of the Pare and Usambara Mountains which form a dramatic silhouette. And to the north, Kenya’s vast Tsavo National Park shares a border with Mkomazi forming one of the largest ecosystems, which requires efforts from both countries to protect and conserve this important ecosystem.  It is a common ground for migratory mammals such as the endangered elephants, oryx and zebras during the wet season.

With Mkomazi being on the southern tip of the Sahel zone, it is a classic dry-country reserve of ancient baobab trees, isolated rocky hills, acacia bushes and gray-green nyika bush. This type of dry, hot and sometimes desert-like environment in Mkomazi National Park, you would ask, “How did they manage to film in such an environment?”.

Well, how did they manage to film the Mkomazi Rhino Guardians? 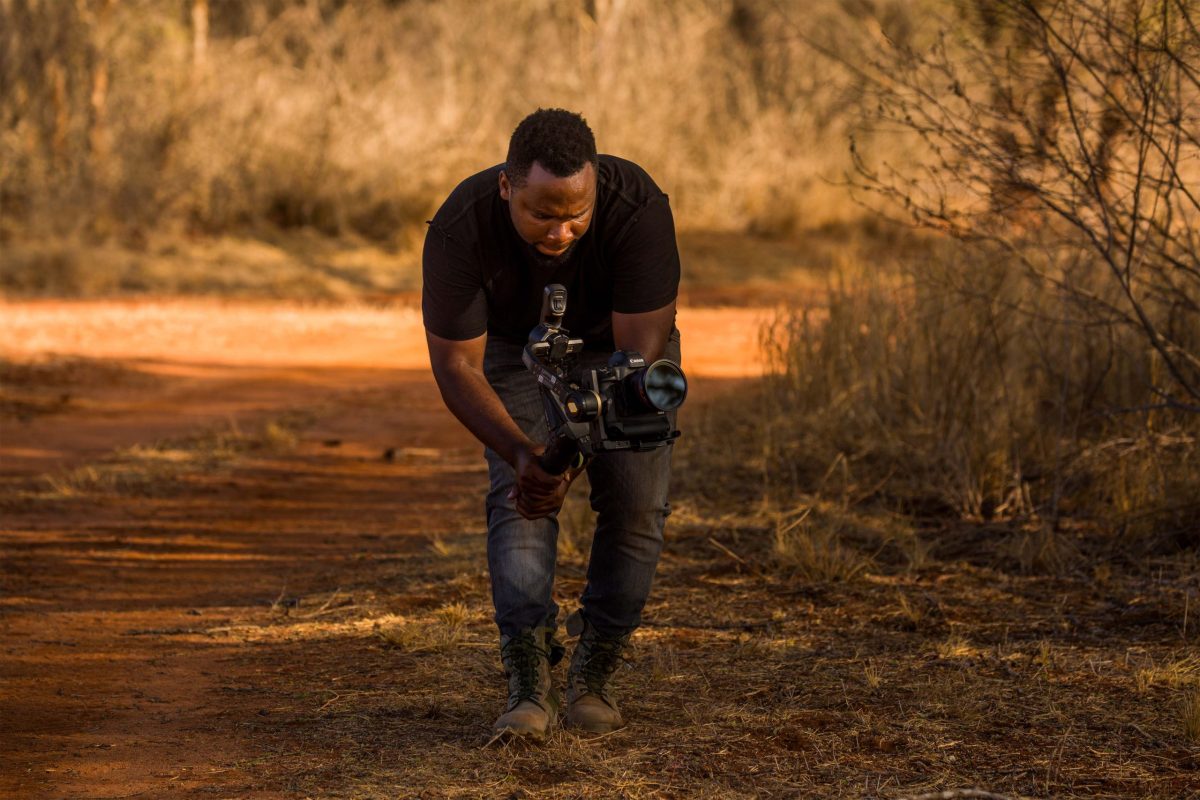 I can say it was a tough month for the filming crew, but at the same time they had an amazing experience. Before I start spilling the beans about the Mkomazi Rhino Guardian film, let me tell you a little about the Rhino Sanctuary in Mkomazi National Park. The Rhino Sanctuary is within the Mkomazi National Park and it was introduced when the government invited The George Adamson Wildlife

Preservation Trust to set up the sanctuary in 1989. The purpose of the rhino sanctuary is to re-introduce the locally extinct species (black rhino), restore the habitat from the overuse of human activities and their livestocks, and implement breeding programs for the black rhinos and wild dogs within Mkomazi National Park. So, you can imagine how much fun they had filming, seeing the infamously fierce wild dogs and at the same time filming the majestic black rhinoceros.

As I am writing this, I am as excited as if I was actually in action, on the field creating the content for the film. I mean who wouldn’t want to be chased by a ferocious, dinosaur-looking beast, like the entire crew was as they were filming from their vehicle, one of the many highlights of their filming experience. 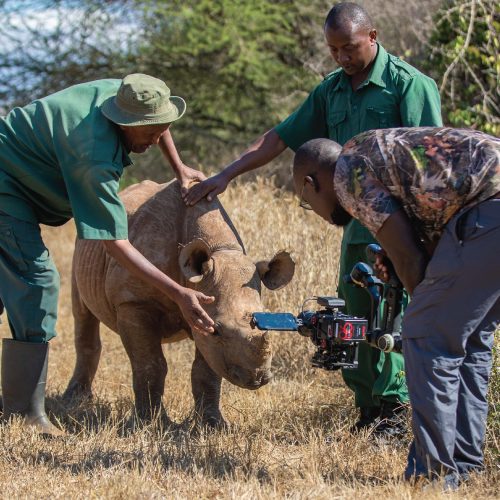 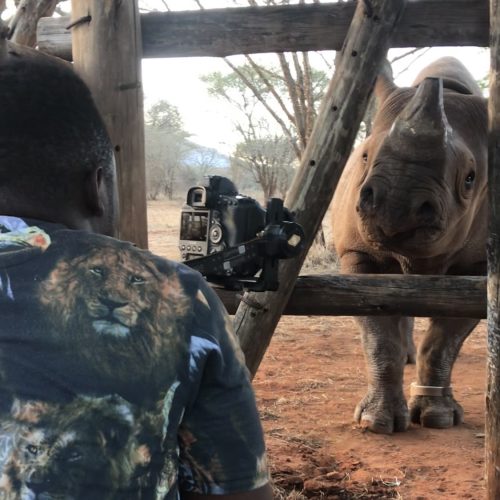 Let’s expand a little more on the filming crew’s experience. For some it was the first time encountering or even seeing a black rhino up close, and hey, who wouldn’t be thrilled with such an amazing opportunity for others. They were close enough to even see the color of their tiny beautiful eyes. Please don’t try this on your own, have the trackers with you when you visit. They are beautiful (in my opinion), but black rhinos are well-known for charging when they feel threatened.

Some of the crew enhanced their filming skills, “filming the vet in action, every single detail is made with a quick decision without mistakes since there was not going to be another opportunity for a second shot”, imagine if you are indecisive. I also can’t imagine the pressure the driver was under, with the film crew hanging out of the sides of the car with cameras shouting “STOP!”, “WAIT!”, “GO!”, “GO BACK!”; Yikes.

Apart from the fun part, the filming crew created memorable moments and came back into town full of great experiences and new knowledge, such as “I got to learn more about their behaviors and know how much they love water, as the trackers were using water to draw them to us so that we could film them up close”. Others had the opportunity to witness first hand how the caretakers care for the orphaned rhino named Kisima, from feeding Kisima, to evening walks, and even sometimes sleeping over when they notice changes in the orphaned rhino. 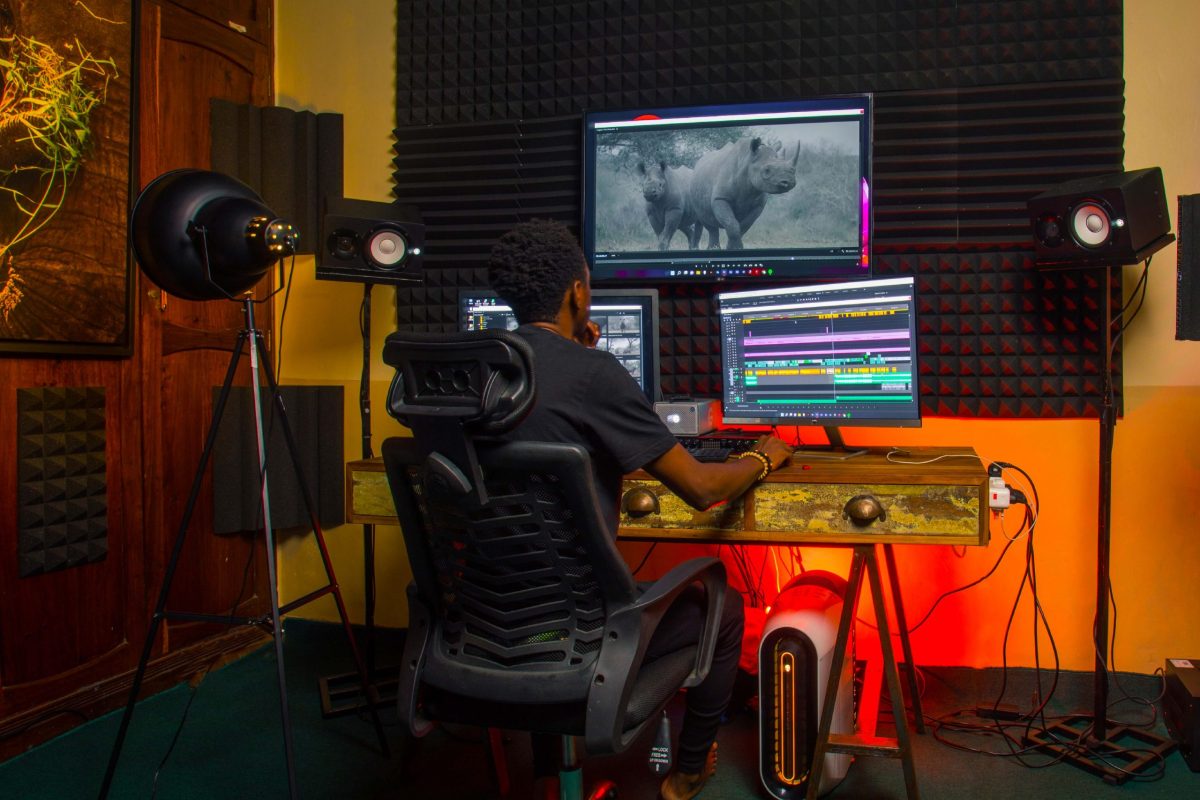 I think the behind-the-scenes crew had the most fun, because surely they had a blast memorizing some of the subtitles, by force. It wasn’t only the filming crew that had fun, but also the editing crew, the subtitle crew (one strongman show), the voiceover crew (another one really strongman show), content creator, the animation and the sound system crew.

Apart from the filming team, the behind-the-scenes crew were the final ingredient to the creation of the Mkomazi Rhino Guardian. I think that in the making of the film, some of them almost cried, others were upset due to the repetition of the same corrections again and again. Come to think of it, actually the filming crew had more fun than the behind-the-scenes crew. Creating the right sound track until it sits right with the film. Making sure that the subtitles are well-written before releasing the film, that’s hard work, but, they all made it through.

What I have learned about this film is that it is all locally created from Tanzania. The photographer, cinematographers, the voiceover, the background music was all created and modified from Tanzania. This film does not only portray how advanced Tanzania is getting when it comes to conserving our endangered species but also the youth are on the move in the use of visual technology to convey conservation awareness. The aim of this film is to provide and address the current situation that is going on in conservation, in this case the black rhino’s in Mkomazi National Park and their history. The film shows detailed aspects on how the black rhinos are well-protected and conserved.

Let us support the upcoming youth that have decided to dedicate themselves to filming and photographing to convey their message of conservation. Go watch the Mkomazi Rhino Guardian film and spread the film to as many as possible to support the work done by our upcoming conservation filmmakers.

The film was released on the 29th July, 2022 through our Tanzanian Local Channel, Safari Channel, where it regularly airs.

Stay tuned as we will reveal other channels for you to access and watch the film.